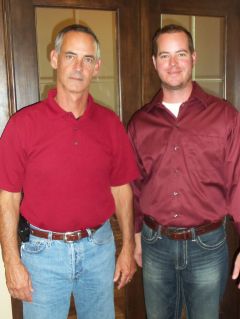 Following in his father's footsteps, Eric Cheatham has been a new home builder since 1978. He and his wife, Nikki, have worked side by side building their residential construction business since that time. Eric works with the new home buyers and Nikki oversees the bookkeeping side of their venture.

In 2003, after 4 years of working and honing his skills as a trim carpenter in speculative and custom construction their son, Austin, joined the Cheatham Construction team as construction foreman.

Primarily a custom new home builder, Cheatham Construction devotes the majority of their time to projects in South Oklahoma City, Moore, Yukon, and Mustang but have traveled as far as Lake Eufaula to build a home.

If you own your own lot/land and have been waiting to build, Eric would be happy to meet with you.